“We are thrilled to honor Claire Denis, one of the finest living filmmakers and a master at portraying the identity crises faced by both the colonizer and the colonized,” said the president. of the LAFCA, Claudia Puig, in a press release. “A distinctive sociopolitical point of view and anti-patriarchal sensibility permeate his work, which is deeply evocative – often tender and intimate but never sentimental – and always uncompromising.” 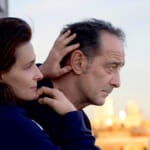