Avijatrik (The Wanderlust of Apu) continues to receive huge praise and appreciation locally and globally. Since 2020-21, despite the pandemic, the film has traveled the world and garnered 44 nominations from esteemed film festivals and 28 awards and recognitions to date. It received two awards at the 68th National Film Awards, as announced on July 22, 2022 by the Ministry of Information and Broadcasting, Government of India. This is the winner, 2020 for:

Speaking of the 68th NFA Awards, Producer Gaurang Jalan said, “This is the most anticipated award for any movie and I’m glad the Avijatrik team got it. I would like to thank the I&B Ministry, the DFF, the Scholarly Jury, the public and the media for supporting and encouraging us along the way. This is the second national award for Gaurang Films, the first being for Safed Haathi, 45 years ago.

Co-producer and four-time national award winner Madhur Bhandarkar added, “We are delighted with our association with Gaurang Films and the overall outcome of our first Bengali film project.” Director Subhrajit Mitra said, “I’m overwhelmed with the appreciation for this film. I am grateful to Gaurang Jalan, Madhur Bhandarkar and the late Dr. Sumit Agarwal for helping me realize my ten year dream. Finally, after six long decades, Apu has returned home.

In March 2022, he received nine nominations and 3 Filmfare Awards (East) for:

Previously, he received five awards from the West Bengal Film Journalist Association in February 2022 out of his 9 nominations for: 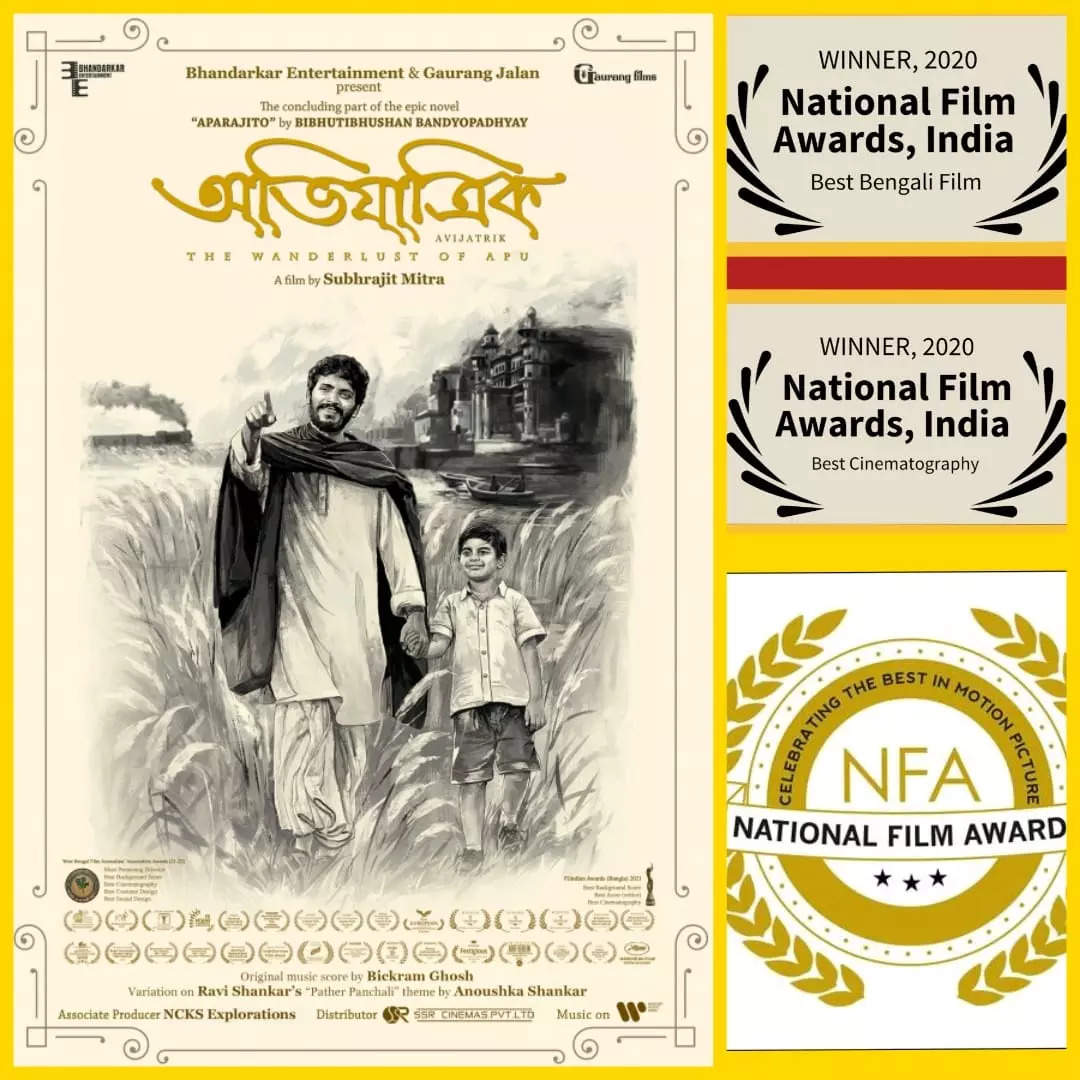 It was also awarded the Special Jury Prize for Best Film, 2020, for Asian Film Competition, at the 13th Bengaluru International Film Festival (BIFFES), by the Governor of Karnataka, at an official ceremony on March 10, 2022 in Bengaluru. Avijatrik premiered at the 26th KIFF, Kolkata (official competition), 51st IFFI, Goa (in Panorama), Shanghai (in International Panorama competition), London (LIFF), Miami (MIFF), Montreal, Boston, Birmingham, Manchester, Berlin , & Seattle – to name a few. The film was selected in the Kaleidoscope section of the prestigious 26th International Film Festival of Kerala (IFFK) from March 18 to 25, 2022.

Avijatrik’s soul music has been acquired by Warner Music Group, India, and it is their first Bengali language acquisition which is available on all major music platforms. The music for this film is by internationally renowned exponent of the Indian classical genre Pt. Bickram Ghosh and the title song is a variation by Anoushka Shankar of her father Pt. Ravi Shankar’s Pather Panchali’s iconic theme.

Avijatrik’s trailer is also creating waves and has nearly 800,000 views so far.

Avijatrik is a unique film with a rich heritage. With ‘Avijatrik’ (The Wanderlust of Apu) – the enduring and endearing character of ‘Apu’ returned to the big screen after six decades! This is the sequel to the classic “Apu Trilogy”, directed by Satyajit Ray and background music by Pt Ravi Shankar. The plot takes off where “The Apu Trilogy” ended in 1959 with “Apur Sansar”. The story revolves around a sublime bond between a father (Apu) and his 6-year-old son (Kajol). Avijatrik has an experienced cast and crew and was shot in 68 locations to retain the rich aesthetic flavor that complements its 1940s India background. It stars Arjun Chakrabarty (as Apu), Ditipriya Roy, Arpita Chatterjee, Sabyasachi Chakrabarty, Master Ayushmaan Mukherjee, Sreelekha Mitra, Biswanath Basu, Tanushree Shankar, Barun Chanda and Sohag Sen in key roles. Avijatrik (The Wanderlust of Apu) was released on December 3, 2021 in cinemas in West Bengal and on December 10, 2021 across India in selected cities. It also celebrated 50 glorious days in Bengal and would soon be re-released for those who missed it during the pandemic.