A low-budget horror film dubbed the ‘sickest movie of all time’ could be heading to the Oscars after an eleventh-hour submission to the Academy.

Terrifier 2, directed by Damien Leone, was presented as a “general admission” candidate on October 31 and is currently under review by the board.

The film’s producers announced the decision on Wednesday in a video on the official Terrifier 2 Instagram account.

Low-budget horror film Terrifier 2, dubbed the ‘sickest movie of all time’, could be headed for the Oscars after an eleventh-hour submission to the Academy

The 95th Academy Awards will take place on March 12, 2023 at the Dolby Theater in Los Angeles. Submissions for entries close this month.

“The most dangerous movie since The Exorcist is coming to the Academy,” the video states. 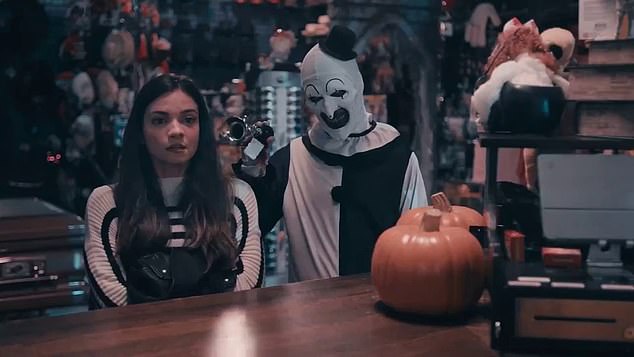 The news comes after Australia’s Film Classification Board issued a warning about Terrifier 2, which is so bloody it has caused moviegoers to collapse and vomit in cinemas across America.

The film was approved for theatrical release with an R 18+ rating for “high impact violence, gore and gore” and hit theaters last Friday just in time for Halloween.

A notice on the Ministry of Infrastructure, Transport, Regional Development, Communications and the Arts website includes a detailed summary of the film’s extreme content, warning that it is not for the faint-hearted. 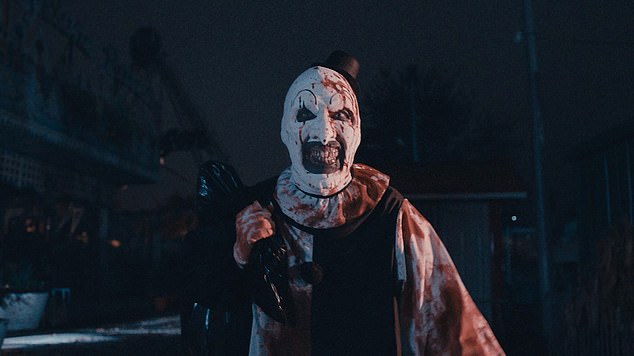 The news comes after Australia’s film classification board issued a warning about Terrifier 2, which is so bloody it has caused moviegoers to collapse and vomit in cinemas across America.

“The film features a series of sadistic and bloody murders perpetrated by an evil clown,” the review reads in part.

“In some scenes, the clown eats pieces of flesh and internal organs from his victims.

“The film features a series of murders that include large amounts of blood and graphic details of injuries such as mutilation, decapitation and dismemberment.”

Horror fans flocked to cinemas across Australia last weekend to watch Terrifier 2, the highly anticipated sequel to 2016 cult favorite Terrifier, which never hit theaters Down Under.

The late-night screening at Event Cinemas George Street in Sydney on Saturday was a boisterous affair with the crowd cheering and clapping after the brutal death scenes.

Many fans were surprised that Terrifier 2 was approved for release, as Australia has some of the strictest film censorship laws in the world.

The film includes graphic scenes of mutilation and torture, including a woman being scalped alive and then doused in acid, a castrated young man, and the killer ripping out a victim’s heart and then eating it. 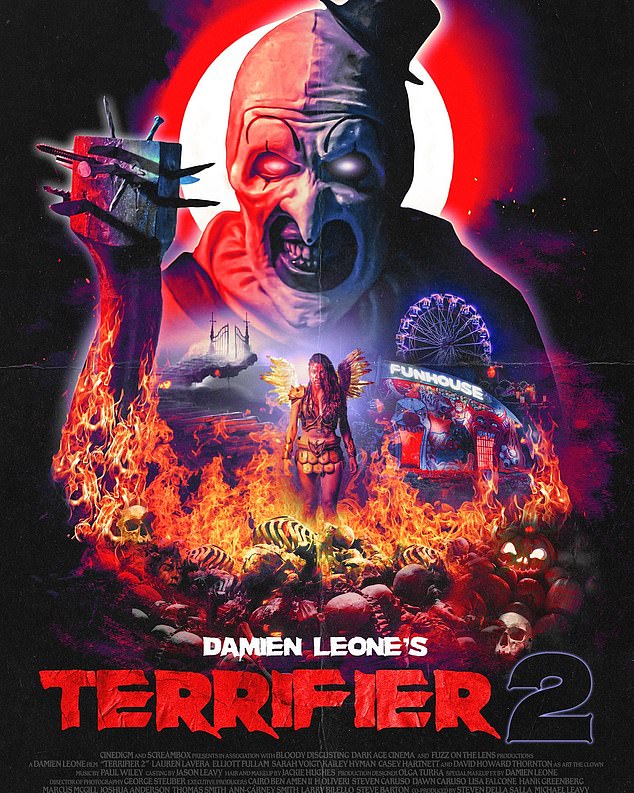 A notice on the Ministry of Infrastructure, Transport, Regional Development, Communications and the Arts website includes a detailed summary of the film’s extreme content, warning that it is not for the faint-hearted. (Pictured: The theatrical poster for Terrifier 2)

Horror fans are calling for the slasher to be considered for next year’s Oscars.

There’s a push for the film’s gruesome gore, handled by director Leone, who is an expert in SFX and makeup, to be recognized in the Best Visual Effects category.

Some even said that leading lady Lauren LaVera and antagonist David Howard Thornton, who plays Art the Clown, deserved nods for their acting.

‘So when does the @TerrifierFilm Oscar buzz start? David Howard Thornton’s performance as Art the Clown is PERFECT, with no dialogue, he maximizes his screen time like no other. @_LaurenLaVera_ is the final new crush for all the girls!’ springs one.

“Terrifier 2 should rightfully be nominated for an Oscar for makeup and hair,” tweeted another.

One fan even said the low-budget film deserved to match the awards tally of The Exorcist, which garnered 10 nominations at the 1974 Oscars.

‘What do you think about it ? Should we submit? Barton tweeted an enthusiastic response. 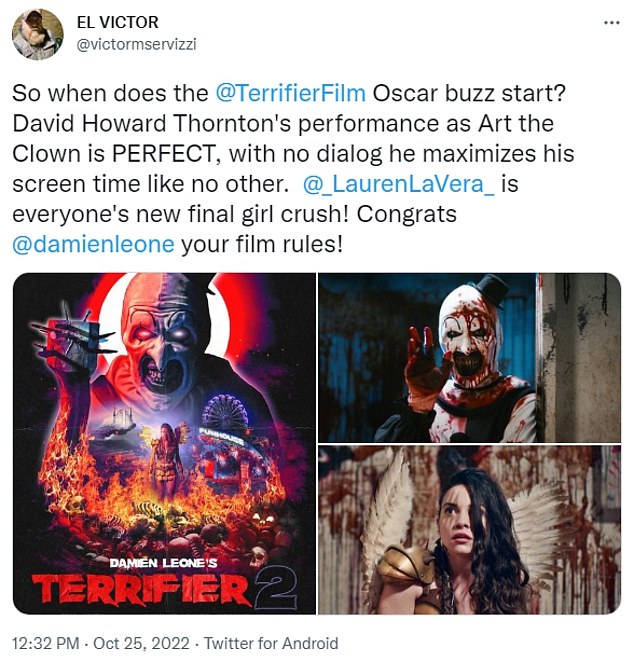 Horror fans are calling for the slasher to be considered for next year’s Oscars. There’s a push for the film’s gruesome gore to be recognized in the Best Visual Effects category

Terrifier 2 became an unlikely box office success thanks to grassroots support and word of mouth.

It initially had a limited weekend release in the United States, but its popularity skyrocketed following reports of moviegoers fainting and vomiting in theaters.

The theatrical run was later extended, and the 138-minute gorefest is now on track to gross over $10 million on a paltry $250,000 budget.

Terrifier 2 has since opened in Canadian, UK and Australian theaters.

Filmmaker Leone recently opened up about reports of fans puking over the film in an interview with Entertainment Weekly.

“Look, I would have loved to have had a few outings, I think it’s kind of a badge of honor because it’s an intense movie,” he said.

“I don’t want people passing out, getting hurt during the movie. But it’s surreal. Here’s the thing, it’s called Terrifier 2, you should probably see Terrifier 1 before you get into this one. If you see Terrifier 1, you’ll know what you’re getting into.

Terrifier 2 became a box office success thanks to grassroots support and word of mouth, after viewers began vomiting and fainting in theaters from the violence

He also tweeted that the reports of the fainting and vomiting were legit, and not just a marketing stunt to advertise the film.

“I swear on the success of the film that it is NOT,” he said. “These reports are 100% legitimate. I wish we were smart enough to think of that! But again, we didn’t need it.

The film became a hit on social media, with fans gushing over the sickening gore. 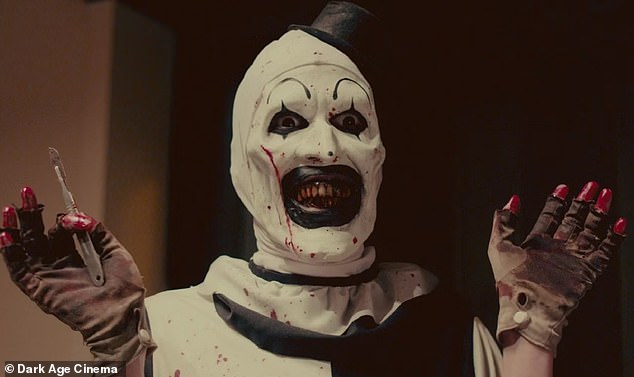 “This scene from Terrifier 2 is the most amazing shit I’ve ever seen in a movie theater,” one tweeted.

‘My friend passed out and the theater called an ambulance. Highly recommended!’ added another.

Despite the gratuitous violence and running time of 138 minutes, Terrifier 2 has been well received by critics so far, earning an impressive 89% on Rotten Tomatoes. 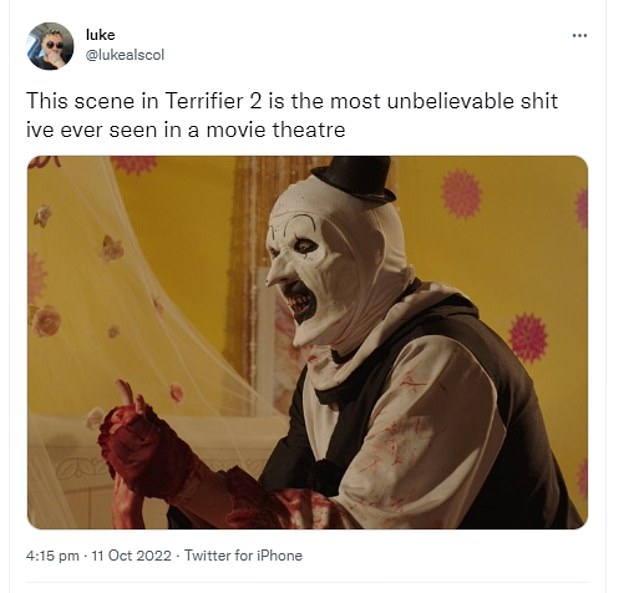 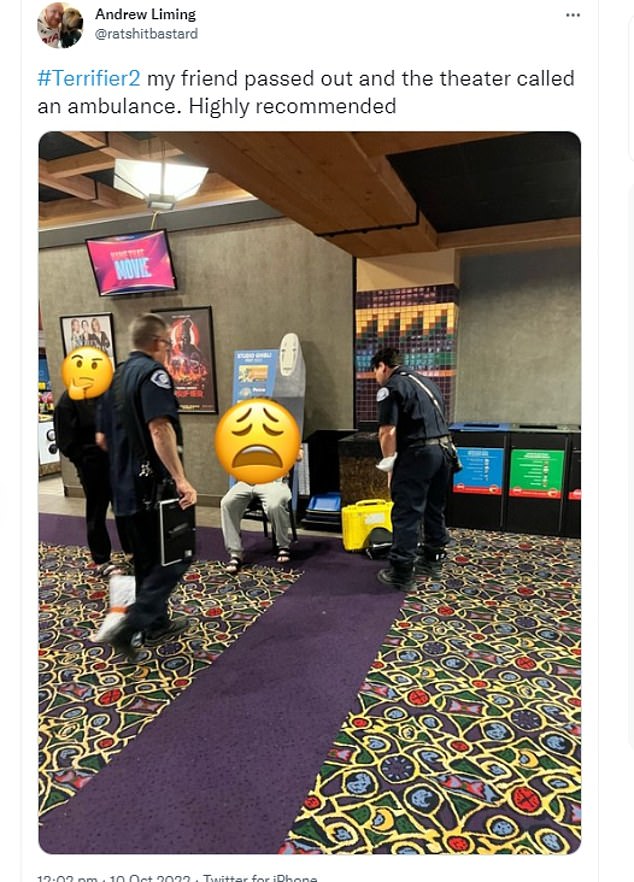 “He indulges in all of his innate, nasty urges, then just goes on… Get together with a bunch of the rowdiest genre freaks you can find and go crazy,” wrote the Austin Chronicle’s Trace Savior.

However, other reviewers weren’t so kind, with Sara Michelle Fetters writing for Moviefreak.com: “Terrifier 2 is exhausting”. Leone’s sequel wore me out, it’s reprehensible sneaky badness too extreme even for me.

“It’s just blood and guts, nothing holds it together. ‘Terrifier 2′ presents itself as a challenge – how much carnage can you take?’ writes Adam Graham at the Detroit News. 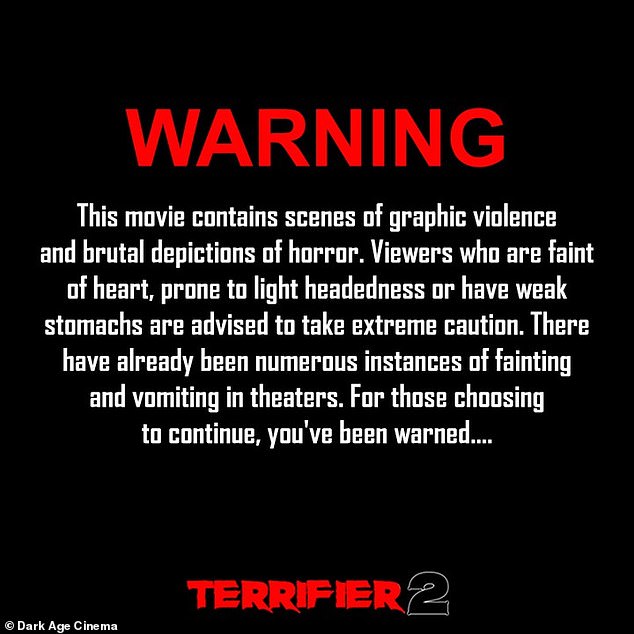 Due to Terrifier 2’s “brutal portrayals of horror”, the production company was forced to issue a social media warning to ensure viewers were prepared before they saw it.

The film went viral after its release due to a particularly gruesome death scene, which involved a maimed person with a hacksaw.

In the sequel, he returns after being resurrected by a sinister supernatural entity to wreak more havoc, this time targeting a teenage girl and her younger brother.